Getting Started with a Career in Bioinformatics
Updated 2020-07-11 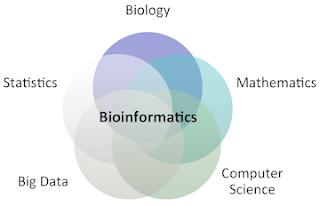 Coding, data analysis, machine learning, and light mathematical modeling are a bioinformatician's bread and butter. Ever wanted to fight humankind's worst diseases with your coding or math skills? What about helping to design the next generation of genetically engineered crops that are resistant to climate change? Being a bioinformatician can give you that opportunity!
Isn’t this kind of like data science?
Yes! Bioinformatics is biological data science. A majority of the techniques that data scientists use day to day (regression models, machine learning, etc.) are used in bioinformatics. The only difference is that bioinformatics focuses specifically on biological and biomedical applications.
How do I become a bioinformatician?
Undergraduate students wanting to pursue a career in bioinformatics can be divided into three categories: life science majors who have an interest in computers (maybe they wrote a Python script for their genetics class that back-calculates potential genetic sequences from a given amino acid sequence), computer scientists or other mathematically-inclined majors who enjoy biology (maybe they want to use their coding skills to help cure diseases), and the minority whose institution offers a formal bioinformatics or computational biology degree (in the past, there were no formal degree programs in bioinformatics). In the short term, a student with computer science training will have an easier time getting started since day to day bioinformatics is mostly programming, but in the long term it's completely debatable as to which student has the advantage based on their undergraduate background (and is probably dependent on the type of job they want to pursue post-graduation).
We recommend at least a master's due to the breadth of the field (see above Venn diagram). For most careers, including bioinformatics, master's-level positions offer more pay and more responsibilities. This isn't to say there aren't plenty of entry-level or bachelor's-level bioinformatician jobs, but these jobs are probably closer in scope to a traditional software developer job. Working towards  a master's will give undergraduate life science majors training in additional programming concepts (e.g. data structures, algorithms) and the mathematically-inclined majors additional insights into the biology that they will be encountering (e.g. advanced human genetics, hallmarks of cancer).
For someone who is already out of school, you will have the easiest time transitioning and landing a job in bioinformatics if you have software development experience. A switch into bioinformatics from any STEM career (science, technology, engineering, and mathematics) is accomplishable even if you have no formal education or training in computer science. Coming into bioinformatics without a STEM degree will be tough and requires a lot of diligence.
Where do bioinformaticians work and what are the working conditions?

There are two broad paths for bioinformaticians, both of which are desk jobs where a bulk of time is spent programming (you can read personal anecdotes about the day in the life of a bioinformatician on this site). The first path is more software-intensive and will in many ways reflect a software developer job: your day-to-day might consist of database maintenance, front end HTML for a new biomedical tool, and some bash scripting for stringing together multiple programs with different outputs into a unified pipeline. The second is more along the lines of a "computational biologist": you act as a biologist but you don't do traditional "wet lab" experiments. You make a hypothesis and then develop new computational methods or enhancements to existing ones to prove or disprove it. You utilize the overabundance of publicly available datasets on the internet, or you are part of a team that generates the data for you to analyze. The educational requirement for this path is more likely to be at least a master's if not a PhD plus postdoctoral training.

These two paths fit into academic (universities, non-profits), industry (pharmaceutical, biotechnology), and government settings (state or national research labs). Here we focus on academia and industry since this is where a bulk of the jobs can be found. Each setting has its benefits and much has been written comparing academia to industry. For a great summary, see this article written in PLOS Computational Biology. In both academia and industry, there are two popular organizational structures: in the first, bioinformaticians work out of a centralized "core" or shared resource. These core members act like consultants on projects throughout the institution or company. In the second, positions are decentralized and each department or division might have their own bioinformatician or team of bioinformaticians. It is not unheard of to have a lone bioinformatician, typically at the PhD level, working to support a single academic lab. There are other organizational structures and occasionally there will be a hybrid of the two, but these are the ones you will most likely encounter.
Hours worked will vary from place to place. Bioinformaticians have the benefit of doing biomedical research without relying on finicky experimental systems and can easily get away with working 40 hours a week. This might differ in a word class academic lab or fledgling startup where you are expected to eat and sleep at your desk.

What does a career in bioinformatics pay?
Long story short: it depends. If you are a PhD-holding principal scientist at a pharmaceutical or bioctech company, then you will likely be making over $100,000 a year. Add tens of thousands more in areas with high costs of living (e.g. Bay Area, New York City, Boston). It is not uncommon for positions in academia to pay over $100,000 but the salaries are typically less than what you would find in industry. Indeed.com has a nice rundown of the different bioinformatics positions and what they pay. Glassdoor.com also has a Bioinformatics Scientist Salary summary. The lowest salary is typically for postdoctoral fellows, which is a post-PhD academic training position that is meant to be temporary.
What is the career outlook?
As far as career outlook goes, there is presently more publicly available data than there are bioinformaticians to analyze it. This wealth of untapped knowledge is just begging for new bioinformaticians to help develop the next big breakthrough of the 21st century. Science has a great story about the explosion of careers in bioinformatics. Similarly, Science has another story with the headline, 'A career in cancer research? Computational skills wanted' with the tagline 'Cancer researchers are generating mounds of molecular data on tumor biology. Scientists with molecular and computational backgrounds are needed to move the growing field of precision oncology forward. Researchers with both skill sets, however, have a leg up'. If this isn’t enough evidence, Nature Biotechnology just wrote this great article titled 'Unlocking Big Data for better health’ that starts out with the great line 'More data has been created in the last few years than in all of human history'. Recently, Wired even has an article encouraging

How should I get started?

Since the day-to-day of a bioinformatician involves a lot of programming, you need to learn how to code. What language should you pick? Check out the article on this site, 'The best programming language for getting started in bioinformatics' for some good advice on getting started. Once you are comfortable programming, you need to build your experience so you can look good on paper to a hiring manager or a graduate admissions committee. Creating a small project to showcase your talent is a great idea, but if you aren't comfortable coming up with something on your own, then you can always contribute to one of the many open source bioinformatics projects. There are so many open source projects that it can be hard to pick just one, but your best bet is to pick one in a popular field or in an area that interests you so this experience can eventually translate into a job.

What if I'm a [insert life sciences-related position] not looking for a career change?

The advice found on this site can still help you! Basic programming and data analysis skills will make your life easier, and these talents are quickly becoming a requirement for advancing your career. Check out this Wired article, 'Want to make it as a biologist? Better learn to code.'